Our Book Club is sadly coming to an end.  During Term 1 we had a look at different Genres of books and read two ‘Mystery’ and ’Crime Solving’ books.  Each member, including myself, read two books then we compared and discussed.  Both these books will be in the Library to borrow next Term!

Friday Barnes – Girl Detective by RA Spratt
Book review from Scarlett (4 stars)
Friday solves a bank robbery and gets $50000, so she sends herself off to boarding school.  This boarding school is filled with crime, which she must solve!  At the end of the book, Friday Barnes is under suspicion by the Police at the Police Station.  The book finished with “to be continued”….  I think Mrs Ilich needs to get the next book!

48 Hours – the Vanishing by Gabrielle Lord
Book review from Tracey Ilich (5 stars)
Jazz’s best friend has been kidnapped!  She and her brilliant nemesis, Phoenix, must uncover the clues and crime scene evidence to get her back.  It leads to a twenty-year-old murder case.  It’s a race against time, they only have 48 hours to collect the evidence and find their friend’s location or she will die.

Very suspenseful, funny and the characters are likable.  Even a little bit scary at times!  Great book; will have to look at getting the rest of the series…

I am Malala by Malala Yousafzai
Book review from Claudia (5 stars + Bonus star)
In Book Club we have 8 people: Shantelle, Jazmin, Nina, Scarlett, Phoenix, Luniva and I.  Mrs Ilich is the leader of Book Club and together we all take turns reading.  Book Club didn’t kick off though until we started reading ‘I am Malala’ by Malala Yousafzai (she is Pakistani).  This is the current book we are reading and its fun!  I love Book Club!

Book review from Jazmin
I am Malala is based on a girl called Malala who lives in Pakistan with her family. Malala loves school and thinks that girls should have the right to an education but the Taliban (who are kind of like a force under their own rules), have tried to ban girls going to school. They believe that females should only be able to walk the streets with a male from their family, not walk alone.  Malala’s father is a teacher who runs the school Malala goes to.  He was being threatened because he was teaching girls. Then Malala started campaigning and standing up for her and others rights to an education. After she started giving speeches and campaigning she got a death threat from the Taliban.  Malala then becomes a worldwide face on TV; the Taliban did not approve. One day Malala was on her way back from school, when the Taliban stopped the bus and asked “which one of you is Malala?” Everyone looked at Malala. The man asked if she was Malala, she said yes. The man pulled out a gun and shot her, shooting her in the head. Malala was very lucky as the bullet passed her brain and travelled close down her spine until it stopped. She was then taken in a plane to London where she received treatment. Malala recovered from her injuries and her family then moved to London to live. Malala returned to her home town of Pakistan to visit.  Malala became a well-known figure around the world. She started doing speeches advocating for the right for girls to have an education.

“One child, one Teacher, one book and one pen can change the world”.

I hope everyone has enjoyed coming to Book Club; it has been great seeing everyone participating in discussions and sharing ideas.  Thank you; it has been an honour to host this club and promote the value of books and reading.   Tracey Ilich – Library Officer 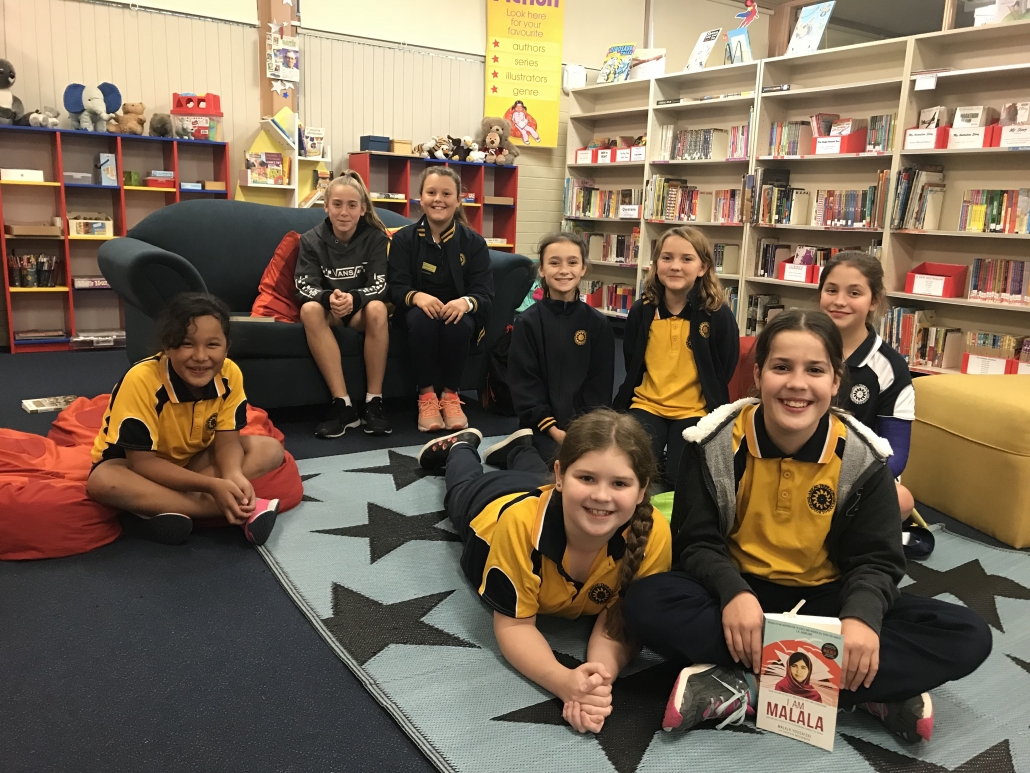